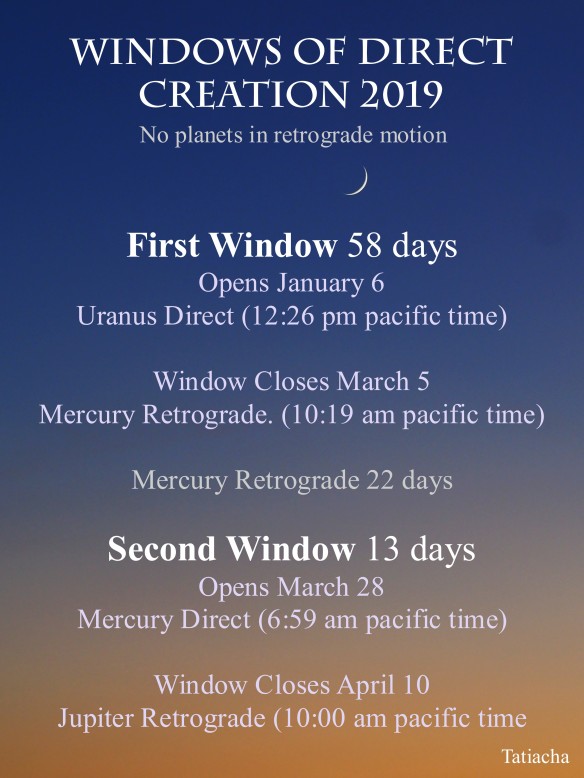 When all planets are in forward motion, it is a Window of Direct Creation, a time to keep clear and focused thought on what you want for yourself and the world. These windows usually last 2-5 days and in many years there are none at all. 2019 has an extraordinarily long one 58 days and then a second one three weeks later!

I have never seen two in one year in the 30 or so years I have been paying attention. What is most interesting is they are intersected only by a retrograde of Mercury. Mercury deals with thoughts and communication. People who have resistance to going deep will have Mercury Retrograde challenges. Electronics often fail. Ever have a period where you went through multiple tires for no apparent reason? It was probably Mercury retrograde! That is because Mercury is the planet of mental activity; if we keep trying to use our brains in the same way, as usual, it just doesn’t work. We may be spacy and not as aware of our surroundings. Go into a grocery store when Mercury is retrograde and you will see people standing in the aisle as if they have no idea where they are and what they are attempting to buy. You’re are standing right there trying to get past them and they have no idea you exist, let alone that they are parked in the middle of a wide aisle blocking traffic. Speaking of traffic car accidents especially the little fender benders are more common during this time. Miscommunication and delays will be just the way it is.

When you align yourself and give over to Mercury Retrograde it becomes a time of relief, a letting go of built-up stress and the best time for resolving inner conflicts and doing meaningful meditation. Resisting what comes up to be looked at is what causes all the snafus in people’s lives. If you get into the flow of Mercury’s release, healing can be fast and deep. You start to look forward to Mercury going retrograde. You leave extra early and expect the delays. You see those people in the grocery store and smile and turn your cart and go around the long way. They are always around three weeks and happen 3-4 times a year.

For me it is like the window never closes with only a retrograde of Mercury in the middle. It is more like a pause and a gift of reflection time. It is important to keep thoughts clear and focused on what you really want to create during a Window of Direct Creation. Doing so for 58 days is very difficult! Life happens and distractions come and go. When Mercury goes retrograde we have three weeks to step back look at what we put out there during those 58 days. To assess them and take them deep inside to see if what we expressed was in alignment with our highest good. We have the gift of this time to gain clarity so that in the second window our intent is even more focused and aligned than in the first window. We have 13 days in the second window to hold true to that energetic creation, with the whole energetic of the solar system there to support us.

By the way, we will also have a total eclipse of the moon over North America in that first window. (January 20th) eclipses are like retrograde in that they will bring up issues for a resolution it will be stronger where the eclipse can be seen so those of us in N American should use this energy to help push our energies forward.

2 thoughts on “Windows of Direct Creation 2019”